During the Late Archaic period in the southeastern United States, bands of hunter-gatherer communities became increasingly complex. The construction of monuments, such as shell rings, along with the advent of new technologies like pottery are characteristic of this societal shift (Russo 2006). Evidence of these first permanent settlements can be studied through examination of shell ring sites. One of these settlements, the Sapelo Island Shell Ring Complex is the oldest known Native American archaeological site in the state of Georgia (Russo 2006). Found along the Atlantic coast on the barrier island of Sapelo, the site consists of three circular mounds built out of piles of shells and other refuse. Rising up to 20 feet from the tidal marsh that surrounds the site, the largest ring has a diameter of 255 feet. Radiocarbon testing has dated the site to 2170 B.C. (Daniels 2012: 1). The Sapelo Island Shell Ring Complex has played an important role in helping archaeologists understand how the first permanent settlements developed in North America. 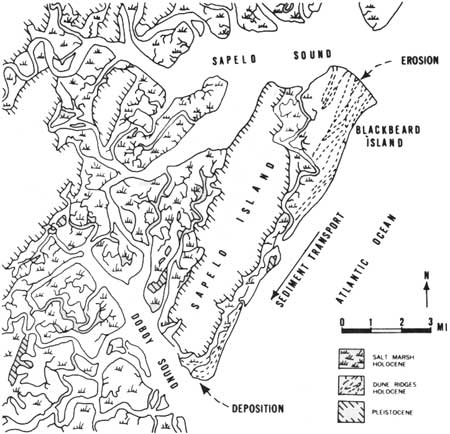 It is not known who exactly constructed the Sapelo shell rings. There is little to no evidence of significant human occupation in the coastal zone of the southeastern United States before shell rings appeared. Most Middle Archaic (8000–5000 B.C.) peoples of the southeastern United States are best known from interior settings and are thought to have been migratory hunter-gatherer bands that moved among upland and riverine environments along with the seasons (Russo 2006:10). By the Late Archaic (5000–3000 B.C.) however, the first extensive evidence of significant human occupations appear on the coast. Late Archaic coastal sites vary from isolated finds, small camps, and minor middens to large amorphous shell middens. But the founding coastal settlements are made most conspicuous by the presence of the large shell rings. From as far north as South Carolina down into Florida, Archaic shell rings can be found in coastal settings. Wherever Late Archaic people found abundant beds of oysters they exploited them, depositing the shells in circular and semicircular piles. Shell rings like those found on Sapelo island are some of the earliest large-scale public works in the United States (Russo 2006:10).

How Were Shell Rings Constructed?

Why shell rings are shaped the way they are and why they were of such large size are questions that have intrigued archaeologists. Archaeologists have many theories about how and why the Sapelo Shell Rings were constructed.  One theory is that shell rings resulted from the deposition of shell in piles and pits next to house structures, built up over many years as the Native American inhabitants discarded their trash (Thompson 2006; Trinkley 1980; Waring and Larson 1968).  The ring-like shape of the shell piles was the result of Native Americans living in circular villages and discarding their refuse behind their homes, resulting in a ring of shell and bone that gradually built up over time. The latest research on the Sapelo Island Shell Ring Complex seems to support this gradual accumulation theory (Thompson: 2006). Fish bones, along with mammal and reptile bones, can be found along with various shells in the Sapelo rings. This suggests that the shell rings are indeed built from the refuse of daily living; an idea supported by research showing that this refuse accumulated over a long period of time. Although the shell rings themselves may be constructed from refuse, it appears that the central plazas of the rings were purposefully constructed as a location for ceremonies, feasts, dances, games and other daily activities of village life. Archaeologists have discovered that the interiors of the shell rings are lower than the ground outside of them, a difference in height that may have been prompted by the villagers cleaning the central plaza area by sweeping away and adding refuse onto the shell ring. Doing this would have added to the height of the shell ring while simultaneously lowering the ground level within the ring, leading to the elevation difference we see today.

How shell rings were formed may be linked to the social organization of the groups that built them. While smaller rings seem to be built out of the incidental discard of food refuse coincidentally placed in the same planar layout in which the builders lived, there is evidence that larger rings were built rapidly with the shell remains of feasts. Shell was discarded in large piles, probably by large groups rather than individual households. Determining the methods of construction of shell rings is thus essential in determining the organization of the societies that constructed them (Russo 2006: 24). Shell ring construction is rarely seen after the Late Archaic period. While subsequent coastal cultures definitely organized their settlements in circles and mounded the refuse of shell into large pilings, the combination of circles and shell pilings never became a tradition after the Late Archaic period (Russo et al. 2006). Late Archaic shell rings represent unique significant structures in the annals of United States architectural history. Their significance is compounded because of their connection to the first sedentary settlements found on United States coastlines and the changing social formations that arose with them (Russo 2006: 27).

Although the large mounds associated with shell ring sites are the most immediately striking cultural features, they are not the only significant remains. Shell rings such as the Sapelo Shell Ring Complex are associated with the regional introduction of ceramic technologies, holding the earliest evidence of pottery in the region (Russo 2006: 31). For archaeologists, changing technologies can be related to social transitions. Especially in the southeastern United States, changes in cooking technology may be correlated with these changes in social organization. At ring sites, the most obvious correlates in changing technologies can be seen between the initial appearance of pottery and the initial appearances of the shell rings themselves.  Archaeologists have speculated that the development of pottery was linked to shellfish exploitation at coastal and riverine environments (Russo 2006:33). Some archaeologists have suggested that developing pottery increased the efficiency of processing coastal food sources (Goodyear 1988). Others have suggested that pottery increased the efficiency of storing and cooking shellfish. Viewed in this manner the creation of early pottery can be connected to shell rings, the construction of which required large amounts of shellfish in short periods of time to sustain the feasting ceremonies theorized to be important to their formation. The location of the shell ring settlements such as on Sapelo Island gave Late Archaic groups easy access to a supply of rapidly regenerative oyster beds, which in turn allowed for large-scale feasts and the construction of shell rings (Russo: 2004), and the development of pottery was critical to supplying the feast items in the form of on-demand shellfish resources (Sassaman 1993:227).

To archaeologists, the transformation of nomadic hunter-gatherers to coastal fisherfolk was an important step in the evolution of precontact United States cultures, reflecting changing perceptions of the habitable landscape by Late Archaic coastal settlers (Russo 2006:59). Archeologists have suggested that prior to the Late Archaic period, the sea level was too low or the rise too rapid to provide a stable environment for the growth of the estuarine shellfish and fisheries, resources vital to the support of future coastal settlements (Brooks et al. 1989; Miller 1998:72; Widmer 1988). Other theories have suggested that coastal settlements may have preceded those found during the Late Archaic but were lost to archeological observation by rising sea levels (DePratter and Howard 1980:33; Russo 1996). Rising sea levels are also seen as causing the abandonment of the coastal shell ring complexes. The last shell rings were constructed around 3000 B.C., and at a time of large changes in the coastal environment and culture. The rising sea level flooded rings, mounds, and habitation sites forcing changes in established settlement patterns, as well as social organization. Eventually, shell midden sites became smaller across the southeastern United States, pottery styles changed, and large-scale public architecture ceased being built for centuries to follow (Russo 2006: 60). The occupation of the Southeast by societies that organized around permanent settlements, constructed public works, and feasted at ceremonial sites, changed to occupations by isolated groups, small in scale and dispersed across the coastlines. As one of the earliest coastal settlements, the Sapelo Shell Ring Complex and other shell ring sites are vital to the understanding today of Archaic hunter-gatherer adaptations to coastal environments.

2004 Measuring Shell Rings for Social Inequality. In Signs of Power: The Rise of Cultural Complexity in the Southeast, edited by Jon L. Gibson and Philip J. Carr, pp. 26–70. University of Alabama Press, Tuscaloosa.

1993 Early Pottery in the Southeast: Tradition and Innovation in Cooking Technology. University of Alabama Press, Tuscaloosa.

1968 The Shell Ring on Sapelo Island. In The Waring Papers: The Collected Works of Antonio J. Waring, Jr., edited by Stephen Williams, pp. 263–278. Papers of the Peabody Museum of Archaeology and Ethnology 58, Harvard University, Cambridge.

1988 The Evolution of the Calusa: A Nonagricultural Chiefdom on the Southwest Florida Coast. University of Alabama Press, Tuscaloosa.